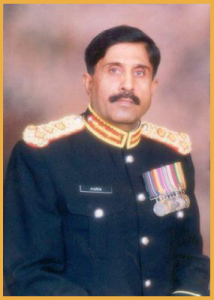 From early childhood, Brig (R) Haris Nawaz realized that he needed to do something for this country just like his parents and their forefather. He completed his primary education and pursued his intermediate from Islamia college Lahore. Brig (R) Haris Nawaz joined Pakistan Academy in December 1971 and got commission in Pakistan Army on 20th August 1972. He served 32 years in the army before retiring in 2004. Brig (R) Haris Nawaz got married on 1st November 1975 and has 2 sons and a daughter. He works as a security and defense analyst giving his views on geopolitical and defense-related events nationally and internationally. In his spare time, you will find him reading books, hunting, or playing golf.

After getting commissioned in the Pakistan army, Brig (R) Haris Nawaz joined the 18th Baloch Regiment which later was converted to the 3 Sind Regiment. He attended the school of infantry and tactics in Quetta and studied at command and staff college Quetta and Later he was also appointed as an instructor. He served as a brigade major of an infantry brigade before leaving for Saudi Arabia. He left for Saudi Arabia for his secondment in 1990 during the gulf war where Pakistan Armed Forces deployments included sending its military in support of Saudi Arabia. As the gulf war came to an end, he moved back to Pakistan where his achievements were recognized, and were promoted to a leadership position where he commanded an infantry regiment. He was later posted to the school of infantry and tactics as a chief instructor where his roles and responsibilities included training the young officers of the Pakistan army. He was appointed Colonel Staff of Infantry Division in Jhelum and commanded an Independent Infantry brigade at Badin Cantt from 1998 to 2001. He completed his master’s from National Defence University, Pakistan in defense and strategic studies and worked as director of joint warfare and training at joint staff headquarters Chaklala Cantt Rawalpindi until his retirement in 2004. Brig (R) Haris Nawaz spent most of his career in the army in instructional, command, and staff roles in Balochistan, Sindh, and Northern areas. He commanded the Northern Light infantry regiment at Siachen, the highest battlefield in the world.

Upon retirement in 2004, he settled in Karachi and served in NAB, National Accountability Bureau as Director of Financial Crime, Sindh from 2012 to 2013.  Brig (R) Haris Nawaz worked closely with the Ex-president of Pakistan, General Pervaiz Musharraf, and worked for 2 years as General Secretary – Sindh of All Pakistan Muslim League (Political party headed by Ex-President General (R) Pervaiz Musharraf).In 2015, he left the party and started appearing as a defence and security analyst on national and international talk shows. He was also appointed as an advisor to the chief minister Sindh during the caretaker government in 2018. He was given the portfolios of four ministries which include works & services, prison, social welfare, and special education. He was one of the few to officially represent the Pakistan army on media as a defence analyst and was selected by the media wing of the army (Inter-Service Public Relations). His role as a Geopolitical and defence analyst was to critically analyze the Geopolitical developments in the region and their effect on Pakistan.